Lately, I've been experimenting with a new game concept, and so far, it's turning out more interesting, more challenging and over a a better idea than I anticipated.  The idea came to me one night before going to bed, and the name soon after!  Let's have a look at Shogun3D's latest title: Loop-til! 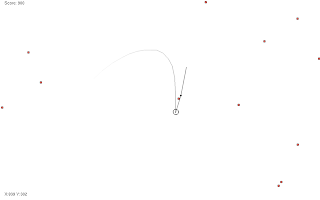 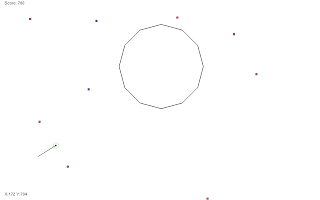 Looking at these two screen shots, you're probably thinking "Okay, what the heck is this?".  Okay, let's get into that.  You, the user, are controlling the black dot, which leaves a black trail behind it wherever it moves.  Your objective: loop around the red squares to create a circle and any squares caught in the circle are destroyed.  If you touch a red square or touch the sides of the screen, you lose.  There are also blue and green squares.  Touching a green square will give you a shield which is good until you touch a red square.  The blue square will destroy all squares on the screen, even the good ones, so be careful.

In order to create a circle, you need to move the dot in a loop and cross the trail you left behind before it fades out.  The circle you created is called the "Kill Circle".  The circle is only good for the moment it was created, and will fade out once it's been created.  Just kill as many of those pesky red squares as you possibly can.  Sounds easy?  Think again!  This game is not exactly a push over or child's play.  Even I've been finding myself challenged and sometimes even baffled by my own game!  These squares come from random directions and move at various speeds.  Just be careful and don't let it tick you off too much!

Another interesting feature of this game is that everything you do will effect the outcome of the game!  Let's say you destroy the first 3 squares but ignore the next three, this will impact the game play session's outcome!  Those who have a high IQ or have good pattern recognition skills may appreciate this game.  I find it best to develop a strategy from the beginning of the game to get the desired result you want after destroying what squares in what sequence does what.  Tbh, this wasn't a feature that I was planning on, but the secret is in my random number generator where every event tied to it effects the outcome directly.  In a short sentence, pay attention to what you do and see what creates more desired results.

Development on this game is moving pretty fast and so far, the immediate releases will be for Windows (Win32/Win8), MacOSX, iOS and Android.  I already have a working prototype for iOS.  The Mac port is working and the Windows port will be worked on within this week.  Stay tuned for updates on this unique concept!

Shogun.
Posted by blueshogun96 at 4:56 PM No comments:

Okay, now I can finally say that the Super MilkChan project is finished.  That last bug was really annoying but I found a work around for it.  I'm just glad this project is finally done so I can move on to bigger and better things.

I also changed the controls a bit by moving the buttons to the bottom while raising up the scene above it so that the user's thumbs don't obstruct the user's view of the sides.  Add a few more bug fixes and viola, it's finished!

So it will be released on the app store for free very soon.  I look forward to seeing what sort of critique it may receive.  ^^

Shogun
Posted by blueshogun96 at 2:16 PM No comments:

This is something I've been meaning to post about for quite some time now, but I've had numerous people asking me about the Super MilkChan game and when it will be released.  The wi-fi at my place has been down for a few days now, so I had to run to the nearest Starbucks.

It seems that every time I fix a bug in MilkChan, a new one arises.  This one nearly makes the game irritating to play, so there's just no way I'm releasing something that I know is broken.  I've also gotten feedback from other people about re-positioning the buttons to make the controls a little less awkward.  See what happens when you listen to your fans and potential followers?  Your game improves!  Stay tuned.  For more updates!

Shogun.
Posted by blueshogun96 at 6:09 PM No comments:

Now, I feel like a complete twit for not noticing this earlier.  \/_\/

According to this fairly new tweet by Sony Playstation's twitter page, Sony is looking to recruit more indie devs to develop for their current and next consoles.  It appears that Sony wants to get off on the right foot with indie devs and build up it's list of content prior to it's release.  IMO, this is a pretty smart move.  Considering that the PS3's profitability wasn't nearly as high as Nintendo's or Microsoft's console, even the iPhone (as a gaming platform), at a certain point, I don't think Sony can afford to make the same mistake twice.

The indie market is growing at a very fast pace and it can no longer be ignored.  Many say that the indie market is growing too saturated making it harder to stand out amongst the ever growing list of competition.  Of course I agree, but if there's one thing I learned about marketing is that the best time to get into a particular market or area of the market is when the market penetration level is near or at the %2 mark.  This rule has been used in other markets for years and usually pays off.  Maybe it's time for Shogun3D to put it to the test!