Lately, I've been trying to spend at least 60 hours a week coding on my game projects.  Since I don't have a day job (will blog about that later), or other things hindering me or demanding my time, I've got a very large amount of time on my hands to work on this from sun-up, till sun-set!  For the past few weeks, I've been focusing primarily on gameplay and feasibility rather than the other stuff, but there comes a time where closing and re-opening your application every time you want to try again.  So, I spent the past few days designing a new and improved menu API class.  It's not as robust as it should be (a few hard coded things that should be configurable via .xml), but it works for what I need it to do.

For this game, I specifically chose to use the Windows Metro look for the menus.  I've had one person tell me that Windows Metro kinda goes well with OSX, in an odd way.  Another person said that a metro look might drive iOS users insane!  Well, that's a risk I'm willing to take! 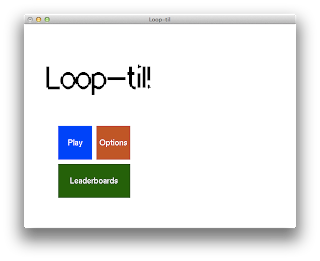 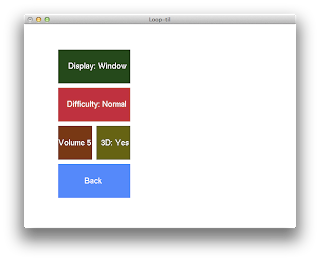 As you can see, I am a fan of the Metro style, hence I wanted to give "Mac-Metro" a shot.

Btw, I know the title font looks especially bad.  Just know that it's really just a place holder for the time being.  This will most definitely be changed in the final release of the game!

Aside from that, I don't have much else to say besides the fact that I added a few new game features (ohhh, it's nothing *snicker*).  And as always, thanks for reading!