I finally got around to porting BugPlanet to iOS a few days ago!  It didn't take too much work, but even this game had me frustrated during the porting process from time to time.  A few screens: 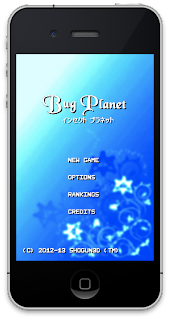 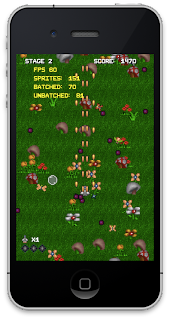 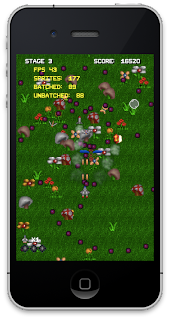 I should have done this before, but I was too focused on other things, so sadly, it fell on the backburner for a while.  While it's not ready to be released, it runs pretty well... as long as you're using an OpenGL ES 2.0 compatible device, that is.  I tried running this game on a 1st Gen iPod Touch and an iPhone 3G, but the frame rate in game was 48fps on average, and would often drop to 30fps or below, even when scenes weren't too intense.  Although I tried to optimize the code for the iPhone a bit more, it did little to nothing to help improve the frame rates.  On my iPhone 4S, however, it runs at a rock solid 60fps the majority of the time.  I have yet to try this on an iPad of any generation (I don't own an iPad, anymore).

Aside from the bad frame rates on older iOS devices, the touch controls could probably be a little bit better and I somehow broke the pause feature.  All can be fixed rather easily though, but what ticks me off the most is that, once again, iOS 7 breaks something simple, like audio.  Whenever I'm leaving the credits or game over screen, the audio stops completely, until I step into a different menu screen!  Urgh, and I have no idea what's causing this, as it shouldn't be an issue.

For the most part, it works, rather well.  Just needs some fine tuning, and then it's ready to submit to the App Store!

Just thought I'd give you guys an update of this game.