This is a game that I've been working on for quite some time and have quite literally lost quite a bit of sleep working on it.  It's my 2nd bullet hell shooter, Bug Planet!  Using a more enhanced engine used to create RyuAwai (speaking of which, I haven't blogged about this yet), Bug Planet aims to be a challenging shmup/bullet hell shooter pushing the user to his/her greatest potential under an ever increasing difficulty!  The longer you stay alive, the harder it gets!

Story: "On a newly discovered binary Earth-like planet in another galaxy, you are an elite spacecraft pilot assigned a mission to accompany the team of scientists hired to investigate the newly discovered planet and determine if the planet is hospitable for human colonization.  Very soon after your arrival, you are attacked by a swarm of hostile giant insects who assume you and all other humans as a threat!  It's time to hop in your ship of choice: one with great maneuverability or the other with heavy artillery!  You, and you alone are the only hope (because the military didn't want to send backup)! Choose quickly, before you and your crew are destroyed!"

I started putting this project together in late November of last year (2012) but at the moment I was busy with other things and other game projects.  Now I've been putting the majority of my development time into this game to get it working in a more stable state.  Most of the game's mechanics and features are ready and working.  It still has some fine tuning and additional things to be added before being released.  All of the required resources have been gathered except sound effects.  It's not easy finding the right sound effects for a particular game genre sometimes.  I'm still improving my sound editing skills as I go... -_-

There are a handful of extra features I've been working on.  I won't say what they all are (just in case I see the need to drop any number of them and avoid disappointments , but one troublesome feature to add to MacOSX apps is force-feedback.  Unlike Windows via DirectInput or XInput for 360 controllers, or even iPhone's rumble feature, MacOSX does not have a straight forward means of implementing force feedback or any means of joystick support.  It can be done, but it isn't very easy and the process is fairly long and requires a large amount of code.  Sure, I could always use SDL 2.0 for both, but not only is SDL 2.0 not yet stable, but using it actually broke BugPlanet completely.  Therefore, I'll be setting out on my own to write my own code to implement this feature.  Joystick support is already added and works well with my 360 gamepad (after installing the right driver, of course).

Working on this game has been a good experience, but I hope it doesn't resemble Bug Princess too much.  When I started writing this game, I did not have Bug Princess in mind at all, but it still slowly but surely grew into a game that started resembling it.  Now, I hope I don't piss off any Cave employees ^^;

Release Date: Soon, but when it's ready! 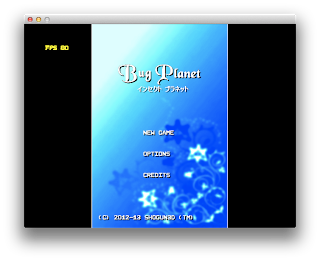 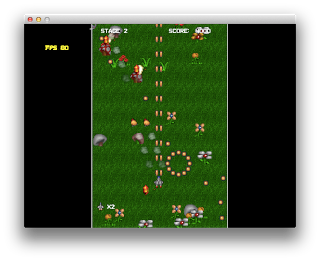 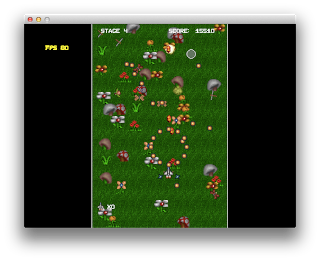